BDPA, formed in 1975 right here in Philly, is a nonprofit organization of professionals in the Computer Science and Information Technology (IT) fields and the premier national organization for Black IT Professionals.
Posted by Unknown at 12:00 PM 1 comment: 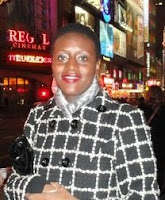 Renetta English is This Year's BDPA New York Chapter Prez. Members of the BDPA New York chapter have elected Renetta English to serve as 2011-2012 chapter president. English has been a member of BDPA since 2004 and served in several leadership roles. In 2008 she was the New York chapter's HR director. Last year she was the chapter's VP of membership management; chapter membership grew by thirty percent during her tenure.

English clearly believes that BDPA is a premier organization for IT pros. "We must all work together to participate in and promote the goals and mission of BDPA," she notes.

Read the Diversity/Careers article here.
Posted by Unknown at 9:45 PM No comments:

Read the rest of the Diversity/Careers article here.
Posted by Unknown at 9:30 PM No comments:

View more documents from Wayne Hicks
Posted by Unknown at 12:00 PM No comments:

The Job Market is Improving for African Americans in IT.  When the economy started getting pummeled a few years ago, the IT job market also took some hits, but 2010 may turn out to be its comeback year, says Wayne Hicks, executive director of the BDPA Education and Technology Foundation (BETF).  BETF is a nonprofit charity founded in 1992 to support the education and technical programs of the Black Data Processing Associates (BDPA) organization.


"The number of firms that purchased booths for the BDPA career fair in July 2010 is a clear indication that corporate America is looking to hire more IT professionals at all levels," says Hicks.

Read the full Diversity/Careers Magazine article.
Posted by Unknown at 8:15 AM No comments:

Read the full NBC Washington calendar offering here.
Posted by Unknown at 5:15 AM No comments: