During these 90 minute sessions, BDPA conference attendees will engage in interactive sessions to promote their professional careers using social networking tools. As a result of these presentations, participants will be armed to promote themselves effectively in the marketplace and demonstrate the value of their skills.


“The days of passive job career management are gone. By using technology to expand our professional networking, we can leverage our connections to reach out to the key people in our industry,” said April M. Williams. “By building bridges and crafting succinct on-target messages, we can market our best qualities.”

Read the rest of the CyberLife Tutors article.
Posted by Unknown at 9:30 AM No comments:

Michael encouraged BDPA members to recognize the leadership development opportunities that BDPA provides as we are moving up the corporate ladder at our workplace. He also shared the concept of diversity dexterity with the audience and noted it was important in his most recent 4-year stint working for Microsoft on the African continent and beyond.

The interview was conducted by Franne McNeal.
Posted by Unknown at 7:30 AM No comments:

The spotlight was on Innovating Our Future at BDPA New York’s 15th Annual Scholarship and Awards Dinner, held Wednesday, June 29, 2011, at event sponsor UBS’s 299 Park Ave office in New York, NY. For 15 years, the chapter, founded in 1982, has held the awards dinner to recognize the achievements of BDPA New York’s students as well as honor its community supporters and corporate sponsors. This year, the chapter also debuted its newly created Small Business Innovator (SBI) award, recognizing innovative IT entrepreneurship in the NYC community, and Member of the Year award, recognizing the contributions of one outstanding chapter member.

Read the rest of the Applause Africa article (including a number of event photographs!)
Posted by Unknown at 9:30 AM No comments:

BDPA iRadio Show interviewed Earl Pace (Founder BDPA; Chairman of the Board BDPA Education and Technology Foundation; CEO Pace Data Systems) on July 12, 2011. BDPA was created by Earl Pace over 35 years ago. Earl has also been on the BETF board since it was founded in 1992. During this interview he shares his insights on the organization's past and his vision for the future.

The host of BDPA iRadio Show is Franne McNeal.

The show is sponsored by the BDPA Education and Technology Foundation.
Posted by Unknown at 11:00 AM No comments: 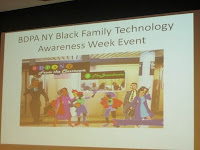 
When asked why they host the event, Co-Chair of BDPA-NY, Damon Holmes said, “We feel it is our responsibility to reinvest in our communities by sharing information and providing interest in areas that can benefit us [the African American community] as a whole. Black Family Technology Awareness Week (BFTAW) is a national public awareness campaign. It is designed to educate and empower African Americans through technology by preparing our communities to become an integral part of the fastest-moving industry of all time.”

Read the rest of the Applause African article.
Posted by Unknown at 12:01 AM No comments: