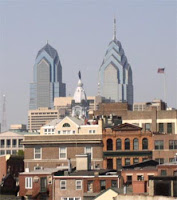 BDPA Plans Gala Silver Anniversary Conference. BDPA is bringing its 2003 national conference back to Philadelphia this year. The conference will run from August 13-17. "Philly is the birthplace of BDPA," says Milt Haynes, BDPA's national president. Haynes is an IT project manager at Lucent Technologies (Naperville, IL). IT pros Earl Pace and the late David Wimberly started BDPA in Philadelphia almost thirty years ago. This will be the organization's twenty-fifth national conference. "We expect the conference to have a big impact this year," Haynes says. He estimates that attendance may top last year's figure of 2,000 by 25 percent.

Read the full media story here.
Posted by Unknown at 4:30 PM No comments: